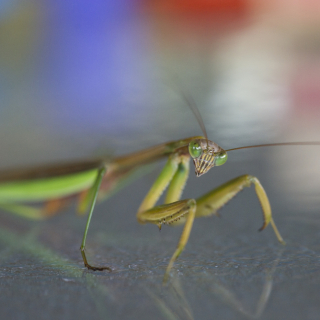 The Chinese Mantis (Tenodera sinensis) is the largest species of Praying Mantis in North America, with adult females being able to see reach 6 inches in length. As the name implies, these insects are not native to the US, but rather they were accidentally introduced here from Asia in 1896.  Chinese Mantises are voracious predators, eating any creatures small enough to overpower. Large adults are even able to eat small mammals and hummingbirds! Mantids have superb eyesight. Their huge compound eyes give them an almost 360 degree view. They also have three simple eyes on the top of their head called ocelli. Mantises rely almost entirely on sight to find food. Once a mantis has a prey item, such as a housefly, in sight, it will slowly creep towards the fly, swaying as if it were blowing in the wind. Once the fly is in range, the mantis will, in the blink of an eye, grab the fly with its raptorial front legs and immediately start to eat it. The front legs of a praying mantis are modified to catch prey. They are both lined with sharp spines, which hold prey tight and prevent escape. They also use these legs for self defense, as they are very strong. A large mantis can even draw blood if provoked enough. Chinese Mantids are very docile, and do not bite or pinch unless they feel that their life is in danger. They much prefer to run away than stand and defend themselves. The adult males can fly, while the bulky females are usually too heavy to lift off the ground, the extra weight coming from unlaid eggs. If a mantis is cornered, and it’s escape is blocked, then it will go into what’s called a threat display. This is when the mantis rears up to full size and spreads its front legs out to the side to appear larger. Adults will put their wings up, which are usually colored on the inside and sometimes have large black spots, which mimic the eyes of a much larger creature. The goal of a threat display is to startle the threat long enough for the mantis to make an escape. It that doesn’t work, the mantis will bite and pinch the attacker in hopes of discouraging it and scaring it away. Perhaps the Chinese Mantises best means of defense is its amazing camouflage. For a predator, the hardest part of eating a mantis is finding it. Mantids will stay completely still in tall grass and plants, almost invisible to predator and prey alike. Their elongated bodies and the striped pattern of the adults helps them blend in with dense, tall grass. 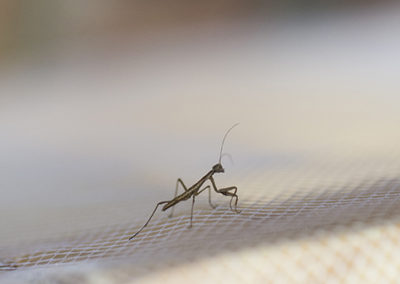 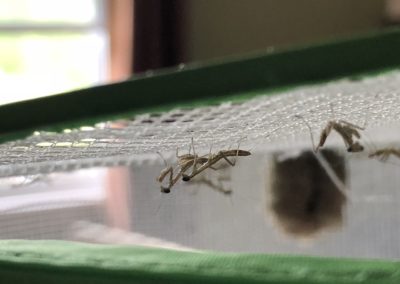 Mantises are considered to be beneficial insects, since they feed upon pest insects such as aphids, grasshoppers, and hornworms. In the fall, Chinese Mantises lay large egg cases, each filled with around 200 eggs. Come spring, the egg case will release hundreds of baby mantises, each one born ready to fend for itself. The nymphs, as immature mantids are called, are around 1-2 centimeters in length when they hatch. Over the course of a few months, the nymphs will molt around 8 times to make it to maturity. Chinese mantises, like most mantids, have a short lifespan, living around 7-9 months. 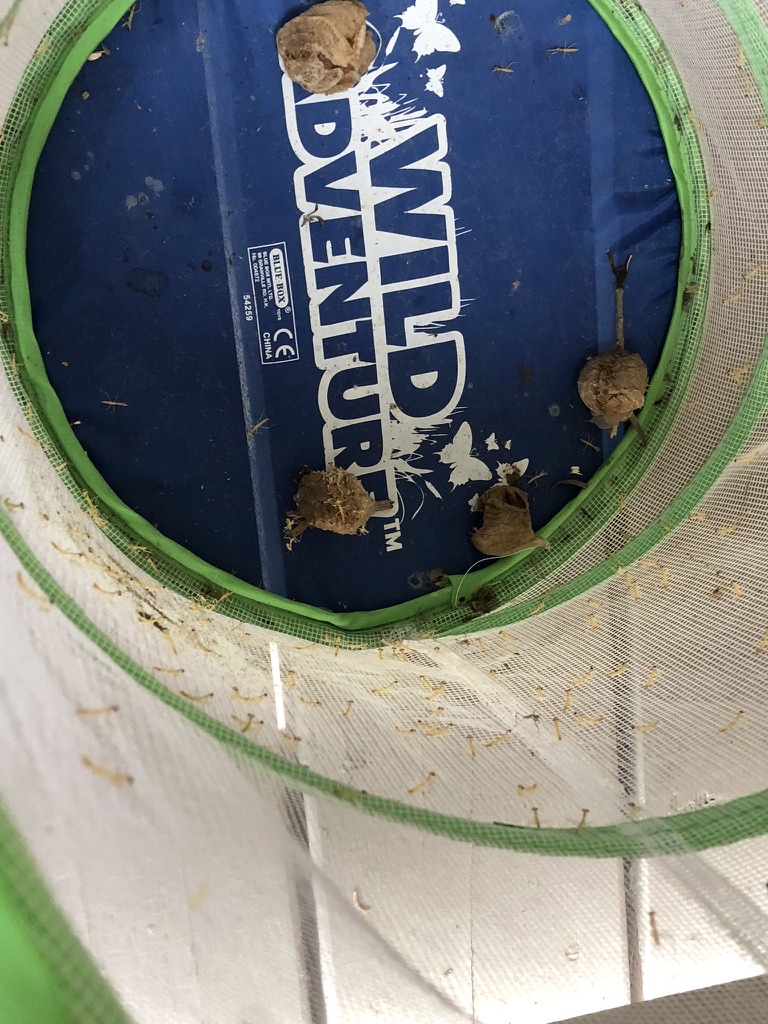 Chinese Mantis nymphs right after hatching. These are nymphs from only one of the egg cases.